If you know absolutely noting about China and her history, you’ve probably at least heard of Beijing. If you haven’t, no worries, I’ve got you covered.

Beijing, meaning quite literally, northern capital, was given that name in the 15th century to distinguish it from Nanjing (南京), Southern Capital. With a population of 19 million, it comes in 8th place for Most Populated Cities, just behind Osaka, Japan and ahead of New York, New York. Popular attractions include The Great Wall, Tiananmen Square, and the Forbidden City.

“The air is so terrible in Beijing.” When I told people I was headed to Beijing to visit a family friend, this was their response 75% of the time. And 10% of the time it was “Oh nice, The Great Wall.” Not to forget the 5% of the time where it was simply “Ha, Communism.” As I boarded the plane headed East, I really had no idea what to expect from China. As an American, and more importantly, an American in the military, I was raised to fear China, to distrust anything Chinese, and to view anything they touched as inferior. I can honestly say that in the “Chinese Visa Acquisition Process” I definitely held these views. The number of times I was told simply “not today” or “this isn’t good enough” when just last week, the SAME LADY at the Chinese Embassy had said “this is all you will need next week,” was very trying on my open mind. When asked to surrender my passport for a week so they could “process it” I naturally assumed that it was now being shipped off to some black market or a tracking device was being added so they could “watch me.” I had heard of stories of cameras hidden in hotel rooms in China, and of people just disappearing after their visit.

As the plane took off I remember thinking “Welp, no turning back” as I mentally increased my personal vigilance and security posture. All around me there was nothing but a strange Asian dialect my ears had not yet been accustomed to after a year in Japan. After 4 very quick hours, the plane landed and we debarked, grabbing our luggage and heading to customs.

My first official interaction with China went smooth enough. “Passport!” The stern looking Chinese customs official barked as I fumbled through my bags. “How long are you here!” He ever so gently screamed. “Just 5 days,” I replied, trying to speak gently enough to calm the situation that seemed to be getting out of hand. There was the awkward pause that I always seem to find myself in at international airports where, they’ve already scanned my passport, but continue searching. Leaning against the counter, bags at my feet in disarray, and fearing that they will somehow find out, that one time, when I was 11, I once thought of grabbing an extra packet of BBQ sauce from Chic-Fil-A even though they said the limit was 2, and throw me in jail. Luckily, that didn’t happen this time and he gently ushered me through, “Ok, go!” Maybe it was just when he spoke English, but I really hope, for the sake of his family, that his Chinese Bedside Manner was better than his English…

As I successfully walked through customs, I approached a line that scanned everyone’s bags. I waited, patiently, as the line proceeded. There were two airport officials, both Chinese of course, and about, 40 or 50 passengers that had already made it through customs. They were there, working the line through, and randomly inspecting passports. “China doesn’t play around,” I thought. The longer I waited in line, the more I started to notice. “Hmm…they are only asking a particular demographic for their passports…” I thought. There were three African men a few people in front of me, and almost systematically, when they got to the scanner “Passports!…” “Maybe they’re asking more people and I’m just not realizing it…” I continued to optimistically tell myself. I kept watching. A family of Argentinians went through, speaking their Argentinian Spanish loud and proud as they are known to do (much love) and no passport check. A Chinese man went through. No check. A Japanese couple just ahead of me went through. No. Check. Finally it was my turn. I almost bet myself $50 that they would check mine, due to, you know, security reasons. I should have taken myself up on that. “Passport!” The “extremely friendly” Chinese security woman barked. I smiled, looked behind searching for some support in how ridiculous this was, handed her my passport, and she shoved it back like she had been on this shift for too long now.

Ignoring the “passport selection process,” and trying to remain optimistic about the People’s Republic, I marched on through the airport, finally being picked up by the family friend around midnight. We drove through the night, passing utterly insane drivers, enormous skyscrapers, and people on the side of the road, offering to wash the insane amount of dirt off of your car that every single car on the road had.

The next morning I awoke to an absolutely gorgeous view of the city. The sun was just rising, and this panoramic view made for the perfect addition to my morning cup of local tea. Without skipping a beat, we left for The Great Wall. Everything about Beijing seemed normal enough. The people were there. The buildings were there. Sure it was a little dirty, but what major city isn’t?

This is right about when Beijing’s charm started to hit me. The locals, for the most part, had no idea what I was saying, and I, of course, returned the favor. But communication is always more than words, and I could tell that these people weren’t the cold barbarians I had been made to believe. Our driver, a Chinese man whose name I will NEVER be able to pronounce, kept making sure that we were at our highest levels of comfort. Every time we almost got in an accident, which happened more than a handful times, he looked back and gave a thumbs up with questioning eyebrows. The men and women at the produce and meat stands gave free samples, and said something in Chinese which I translated via body language and intonation as, “These are great, you are great, you deserve these.” And when we declined to buy, “Have a marvelous day!” I’m guessing of course.

Finally arriving to The Great Wall, we purchased our tickets, took the cable car up and saw, with our own eyes, one of the great wonders of the world. I was pretty taken aback. My friend had probably been here numerous times and was probably tired of bringing every visitor here, but you can’t go to Beijing and not see it at least once. Unfortunately, there is quite a bit of graffiti on the wall, along with stolen breaks and general decay.

After The Wall, our hosts took us to a local grocery store. There was a VERY STRANGE smell that permeated throughout the store. If you took a plastic water jug, heated it, and added raw chicken to it, you could possibly mimic the smell. If that isn’t enough to make you uncomfortable, there was, so, much, raw, meat, just hanging out. 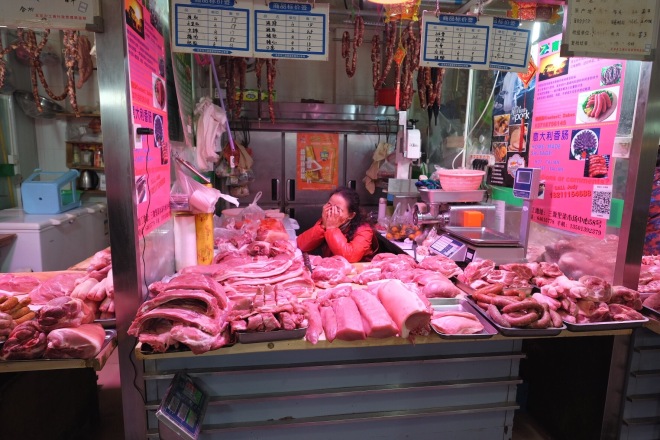 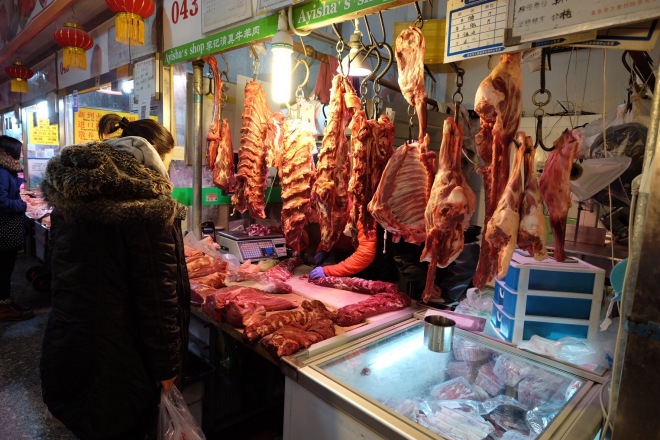 If you’re a savvy reader, or are irritated by mistakes, as I am, even though I make them myself, you probably noticed the percentages in the beginning did not add up to 100%. If you didn’t catch that, no worries. The remaining 5% of people, when made aware of my trip to Beijing, commented “They have amazing food there.” These wise 5%, were absolutely correct.

After getting back to the house, resting up, showering, and heading back out, we made it to a authentic Chinese restaurant. American me expected to see, Kung Pao Chicken, General Tsao Chicken, or any other popular Chinese food item. I was, blown away. Our host ordered this fried duck for us. I have no idea what part of the duck it was, but, the way this meat literally melted in your mouth, as the sugar coating broke apart and gave you a caramel sensation followed by succulent protein made me completely fall in love with China. There was this spicy chicken dish, seasoned with all kinds of herbs and spices. I not only ate my serving, but I had the audacity to ask my host “How hungry are you reaaaallllly?……” It was that good. If you ever get the chance to travel in Asia, go to China, find yourself in Beijing, and try real Chinese food. You will be blown away, or discover that you really don’t have any taste buds.

The next day we were arranged to meet with a Chinese tour guide that would take us around the famous Square, and forbidden city. She was a nice enough women, late 20’s with great English and a great depth of knowledge about China. She pointed out almost every building and gave its history. Right around now, I looked around and noticed the air looked quite odd. I thought it was just the way the sun was rising, but the “filter” didn’t leave once the sun had completely risen. “This is the smog we are famous for,” our tour guide explained. I honestly cant remember if she said that the fog was worse in the winter because everyone was using their heaters and increasing energy consumption…or better in the winter because the air was less humid and thin (if you know please inform me, I’m pretty irritated with myself that I can’t remember). 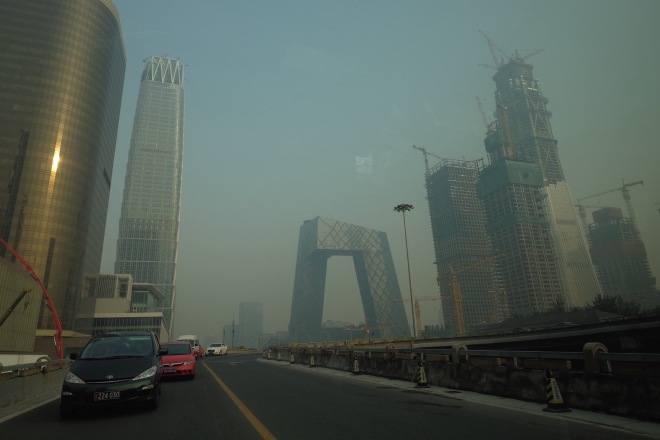 After arriving at all the tourist traps, she started getting pretty political. Really all I care to say about that, but I was worried a passing guard would hear her rhetoric and throw us all in jail. I was happy when she switched from politics and current events to history. Did you know the Emperor of China had a whole city of concubines for him and him alone? I hadn’t. I looked at my girlfriend and made the facial expression for “That would be pretty cool huh?” She wasn’t as amused by this fact, and even less so by my stupidity.

I was really pleasantly surprised by Beijing and China as a whole. They weren’t these savage monsters that knew nothing but how to be rude and untrustworthy. I’m sure they have that, hell, name a country that doesn’t. And although their customer service may not be as crisp as Japan’s, there certainly is something to be said about Chinese hospitality. Of course, I got strange looks in certain places. This really old guy just came up to my face and looked at me. I looked at my tour guide searching for an explanation, and she just shrugged. But people, for the most part, were just as friendly as I had been experiencing back “home” in Japan. Hell, the customer service of these “rude and backwards people” definitely beat some of the restaurants I frequented back in the States.

Right after this “old guy incident,” my tour guide gasped as she looked at her phone. “Trump just won…” she let out in despair. I chuckled as I realized I found out about who my next President was from a Chinese woman in Beijing.